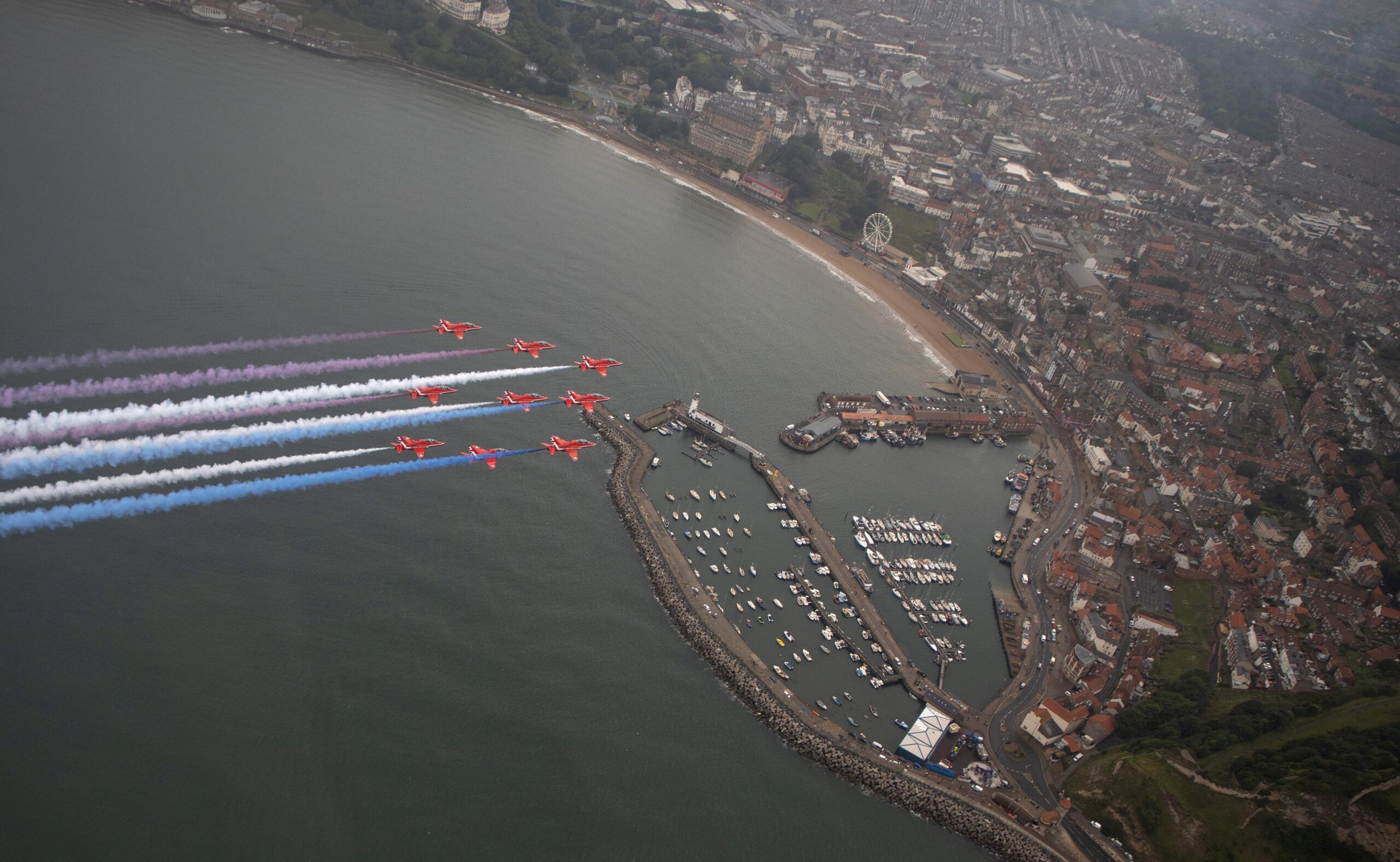 Thousands of people from all over the country are expected to flock to the Yorkshire coast town of Scarborough on Saturday 25 June for this year’s prestigious Armed Forces Day national event.

Scarborough’s celebration of the nation’s Armed Forces – the Royal Navy, British Army and Royal Air Force (RAF), will be a dazzling spectacle of the very best displays and activities on the water, on land and in the skies.

The opening display at 10.30am will be a daring demonstration of freefall and canopy skills by the RAF Falcons Parachute Display Team.

The pomp, ceremony, precision and riot of colour of the Armed Forces Day parade along the seafront will follow. Taking part will be serving personnel, marching bands, veterans, standard bearers and cadets.

At 11.25am the parade salute will coincide with a flypast of the Royal Navy Merlin Mk2 and Wildcat helicopters, and the Navy Wings charity’s Seafire.

Spectacular air displays will continue throughout the afternoon. At 1pm the pilots of the RAF Aerobatic Team, the Red Arrows, will take their distinctive red Hawk jets to the skies for 20 minutes to wow the crowds with their legendary formations and mind blowing aeronautical skills.

The Avro Lancaster, Supermarine Spitfire and Hawker Hurricane of the Battle of Britain

Memorial Flight will fly over at 2pm, followed by a display from the Royal Navy Wildcat helicopter at 2.30pm.

At 4pm the might and roar of the RAF Typhoon’s twin EJ200 R-R engines and its precision for tight loops and turns will bring the air display programme to a memorable close.

Elsewhere a visit to the West Pier in South Bay will be a must to see some of the best military hardware from all three services. In the bay will be the Royal Navy Type 23 Duke Class Frigate and Tide Class Royal Fleet Auxiliary.

On the pier will be the Royal Navy dive team and explosive ordnance disposal vehicle. The British Army will show off its high mobility weapons platform, Jackal 2, while the RAF will offer a Typhoon flying experience in its facsimile aircraft. Budding pilots will also be able to experience a ‘day in the life of the RAF’ with a nine minutes long high-tempo interactive experience.

All three services will also have individual military villages on Marine Drive.

BFBS will host an esports exhibition tournament at Scarborough Spa between 2pm and 4pm. Teams from local schools, colleges, cadets and the community will compete against teams from the Army, Navy and RAF esport teams, in fast-paced Rocket League matches.

Along the seafront there will be many different stalls and displays from charities, sponsors and supporting organisations, including Heroes Welcome, which will have information about local businesses offering a service up grade, special acknowledgement or discount to Armed Forces personnel and their families.

After a closing ceremony at 5pm, the celebrations will continue into the evening with concerts at Scarborough Spa and Scarborough Open Air Theatre.

The full timetable of the day is as follows:

With thousands of people expected to make long journeys to Scarborough for the national event, and the day coinciding with a national rail strike on 25 June that will affect train services to and from the town, Scarborough Borough Council is encouraging people to plan ahead.

Its advice is to leave plenty of time for the journey and use bus services or arrange to car share where possible. People could also consider travelling the day before (Friday 24 June) and staying overnight in Scarborough or in other coastal towns and villages nearby (which should have greater availability) to reduce travelling time on the main event day.

“We are extremely proud and excited to be hosting this year’s Armed Forces Day national event and we are looking forward to welcoming people from all over the country to Scarborough and the wider borough.

“The packed programme and the many supporting events either side of Armed Forces Day have been designed to create a wow factor, promote pride in our Armed Forces and entertain all those watching and taking part.

“The final countdown to what will be a historic occasion for our borough has begun and we can’t wait!”